“Oh, Sweet Lorraine” ~ A Letter From Fred ~ A Love Story in Song

Home/Uncategorized/“Oh, Sweet Lorraine” ~ A Letter From Fred ~ A Love Story in Song
Previous Next

“Oh, Sweet Lorraine” ~ A Letter From Fred ~ A Love Story in Song

When I found this story, there was no doubt I had to write about it. To me this one example perfectly shows us the difference between the generic, sex-laden junk that comes to us from the bankers of Hollywood and the heart and love that goes into making music for the sake of making music. While at the same moment that Miley Cyrus was shaming herself (and most of the industry) on MTV with her simulations of the sex act and singing about dope and glorifying the blurring of lines between rape and consensual sex, I was entranced, spell-bound even, by the story of a 96 year old man, and the words that his heart gave him in song.

Words of unrequited love enduring through the decades poured from his soul and even with no experience writing music or poetry the gentleman penned one of the most beautiful pieces that could be imagined. His story follows.

Then I called my wife in and we wept together.

Then I called Jacob Colgan at Green Shoe Studio in Peoria, Ill. The website said they were closed, but hey, I know how studio cats are… yep he answered even though it was seven o’clock on a Sunday.

“What caused all this,” you ask? Oh, just a post my good friend Susan Leak shared on Facebook, which turned into one of those far-too-rare moments of independent-music-online-serendipity. 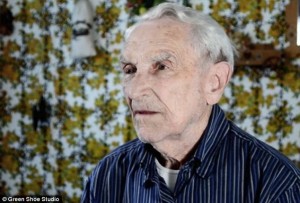 Susan had shared an article about 96 year old Fred Stobaugh of Peoria. Inspired by the loss of his wife, Lorraine, Fred who had never penned a tune before, entered a song-writing contest, and some very interesting things happened.

In the video, which you can view here, Jacob and Fred tell the story of his entry into the local contest that Green Shoe Studio sponsored in order to help area musicians and to help themselves by getting to know more about the music being made in the area.  (sidenote) It’s very interesting to me how the average person seems to assume that anyone involved with music in their area knows everything about everyone else involved, when – for many reasons we tend to wind up isolated while working on our own projects – it can be quite the opposite.

After sharing life for 75 years, Lorraine passed and Fred was alone for the first time. The words he wrote for his beloved are simple and beautiful and perfect. When he mailed them on paper to Green Shoe, instead of emailing a link to a video (as the contest required), he got their attention.

What followed is one of those wonderful things that only happens when the spirit moves. I wouldn’t be writing this if it weren’t still moving. Jacob and the Green Shoe crew decided to produce the song and worked with Fred to get it just the way he wanted it. Then the news caught wind of the whole thing and the story started to spread. When it got to my desk, I knew immediately that there was somethingvery strong happening, and searched out the phone number to the studio right away. 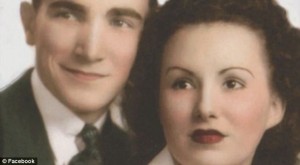 I told Jacob the same thing I told you (hey, musicians can’t hide that stuff…) and he responded, “I did, too.” He told me about calling Mr. Stobaugh and offering to produce the song and of the understandable question of “what’s this going to cost?” I can only imagine the thoughts the gentleman had when told that it was going to be done for free because, “your song moved us.”

That’s how it goes with indie artists, something moves us and something must be done about it. That attitude was obvious from the first moments on the phone with Jacob. I love indie studio cats, they’re so laid back and easy to talk to… so, it’s Sunday night, we’re both busy and I’m sure we could have talked for hours, but I forced myself to cut short.

Read the full article, learn where to buy a copy of the song, watch the video, and get updates on this beautiful story HERE.