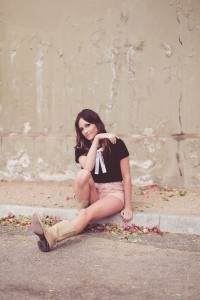 It was one of those nights at the Grand Ole Opry that promised satisfaction for Country traditionalists. One after the other, Del McCoury, Ricky Skaggs and Dailey & Vincent filed out and fired up some sizzling bluegrass.

Yet it was an idiosyncratic new artist that brought the audience to its feet. Wrapped in a tight, blazing-red outfit, Kacey Musgraves teetered out in heels. Smiling a little shyly, she spoke two words — “Hello, Opry!” — and then drifted into “It Is What It Is” (written by Musgraves, Luke Laird and Brandy Clark), surely one of the most wistful and resigned songs ever to open a set on that stage. As she finished, cameras flashed all over the main floor and balcony as Musgraves allowed herself a short rumination.

“No matter what side of the coin you’re on, gay or straight, black or white, somebody is gonna have a problem with it,” she said. “So I think everybody should just do what they do.”

That, and the bouncy beat of “Follow Your Arrow” (Musgraves, Clark and Shane McAnally), both from her debut album Same Trailer Different Park, set off the crowd again. The same folks who clapped to Skaggs’ “You Can’t Hurt Ham” now sang along to a song that suggested kissing lots of boys — or girls — and maybe lighting up a joint now and then won’t bring the Republic to its knees.

The success of Kacey Musgraves may signify a sea change in what mainstream Country is ready to accommodate.

“I love conversational music,” she explained. “I hate when I feel like someone is singing at me. The message of the song is the most important thing.”

Plenty of people have seen potential in this young East Texan, ever since she left Austin at 18 to join other hopefuls in the 2007 season of “Nashville Star.” After settling in Nashville a few years later, she took a few day jobs, including a gig that involved wearing costumes and entertaining kids at birthday parties. But singing demos provided steadier income and helped point her toward a publishing deal with Warner/Chappell.

In that position, Musgraves wrote a number of songs that were picked up by major Country artists. “My first was by Lee Ann Womack,” she recalled. “It was a song I wrote with a guy named Travis Meadows, called ‘There’s a Person There.’ It’s about this older lady who lived in the apartment above me when I moved to town. Unfortunately, it never saw the light of day. But when I figured out that I could make a living by putting things that came out of my brain onto a piece of paper, I really fell in love with that.

She wanted to perform too. Offers came in from folks who misidentified her as a candidate for stardom according to the prevailing industry model. Wisely, she opted to wait for an opportunity she could fully embrace.

“It wasn’t that people were trying to push me into anything,” Musgraves said. “It was more that the material was OK but it didn’t really come from a different point of view. It was like, ‘Oh, this could be a hit. Let’s do this.’ I had the sense to be patient with all that, because I thought that if I’ve got one shot to say something, it better mean something.”

After a promising moment with Lost Highway before the label was shuttered, Musgraves found someone who could give her that shot. “Kacey doesn’t project the typical, middle-of-the-road image that we expect from our female artists,” said Mike Dungan, who began working with the newly signed artist when he became Chairman/CEO, Universal Music Nashville. “Our radio format is crying for something different. This was a new perspective and fresh delivery that was so high-quality that we were confident it would work, given the right plan.

“Her presentation is a bit understated when you compare her to some of the arena artists. So we made sure she was presented in intimate settings. But mainly, we took our lead from the press. The minute they heard her music, the response from all areas was phenomenal.”

Much of that had to do with the overlay of acoustic timbres, accessible tunes, ironic humor and songs that tell narrative stories, in the often touted but rarely practiced Country tradition. Musgraves explained, “I just wanted to create an album with concise character, not just, ‘Here’s a song! This could be a hit! Look what I can do!’ A lot of records nowadays are like that.

“My favorite songs are simple,” Musgraves added. “It’s not that sometimes a song can’t be really intricate, but I never wanted the production to smack you in the face. There has to be space because that makes the idea stronger than loading it up with too many things. It’s never about how many licks somebody can play or solos they can shred. I just want it to feel good. I do love having songs that people can sing along to. I love that pop sensibility as much as a Radiohead song. If you can walk the line between having both, then you’ve nailed it.”

If that means testing Country audiences a little by playing on words like “whore” in “Follow Your Arrow,” or embracing the ennui of a listless affair in “It Is What It Is,” so be it. “Times have changed,” Dungan insisted. “If people give it a shot, they’ll hear that she’s not saying, ‘Go out and do this.’ She’s saying, ‘Just live your life and be happy.’”